The project B3 develops an efficient numerical description of the radiative heat transfer in moving granular assemblies, utilizing experimental and numerical methods. In actual systems, the nature of radiative transport lies in between limiting cases, long range directional exchange among solid surfaces enclosing a large participating gas volume and local short range exchange within a densely packed particle bulk. Here, the the radiative interaction with the interstitial gas volumes is negligible and omnidirectional diffusion prevails, which can be expressed as an increase in effective thermal conductivity. For the systems of interest in BULK-REACTION, the diffusion limit is usually not approached because particles are too large and the direct short-range interchange of radiation of particles of arbitrary shape has to be accounted for explicitly. The directional long range transfer and this local direct exchange must coexist in one domain and interfaces with a gradually changing share of both regimes must be able to move across the domain over time. This will be achieved by merging the widely used Discrete Ordinates Method (DOM) approach with a short range model for the dense system. Spectral redistribution, induced by varying surface temperature of the objects involved, will be accounted for in the dense bed.

Ab initio provision will be made for moving particles of complex shape. However, the operational focus in funding period (FP) 1 will be on polydisperse spherical particles in simplified static geometric configurations or with prescribed movement while bearing in mind and taking preparatory steps for the future extension in FP2.

Since previous experimental verification of thermal radiation transport models essentially focussed on either one of the two regimes mentioned, new and original experiments will provide the lacking data on temperature evolution, radiative fluxes and spectral distribution in generic packed bed configurations. A flexible setup, abstracting the spherical particles as cylinders and enabling a variable arrangement of these objects, will allow detailed experiments to reproduce situations occurring in a reacting bulk. Different static polydisperse and anisotropic situations (with spatial gradients of porosity) as well as a range of initial temperature differences and surface materials will be considered. Initial experiments with monochromatic (cold, LED) radiation will provide a quantitative assessment of the geometry related aspects of the transport. The measured time evolution of surface temperatures, particle core temperatures and spectrally resolved heat fluxes will be used to verify the model. 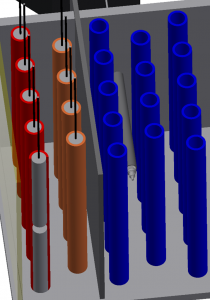